Death of a revolutionary hero

Gerry Adams’ tribute to Fidel Castro, reproduced below, was originally published on the Léargas blog. 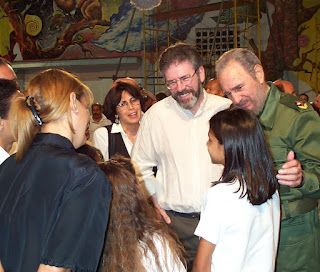 I have been lucky in my life to have met many brave people. Ordinary men and women who in exceptional times in Ireland or Palestine, in South Africa or Cuba, in the Basque country or Colombia, and in so many other places, have taken a stand against injustice. In the face of great brutality they have stood for freedom and independence and an end to inequality and cruelty. Some have been exceptional leaders in the Irish struggle or in other parts of the world.

Today we mourn the death of one of the great revolutionary leaders – a hero and friend of Ireland – Fidel Castro.

On my own behalf and of Sinn Féin I extend my solidarity and condolences to President Raul Castro, to Fidel Castro’s family and to the Cuban people.

In December 2001, along with Gerry Kelly, and other comrades, I travelled to Cuba to unveil a memorial to mark the twentieth anniversary of the hunger strikes in the H-Blocks and in Armagh Women’s prison. The hunger strike memorial is in Parque Victor Hugo – a beautiful park in central Havana – named after the author of Les Miserables. The ceremony was held on a beautiful warm winter’s day and was afforded full state honours by the Cuban government. That memorial was one of many erected that year to mark the hunger strike. Two months earlier I had unveiled a monument on Robben Island in the yard where Nelson Mandela and Walter Sisilu were incarcerated for 27 years. 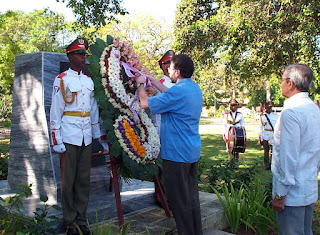 On our first night in Havana we were taken to an outdoor event to mark the formal opening of 200 new schools that the Cuban government had built in the recent past as part of a programme to expand and modernise its school programme. There were hundreds of people present, including many of the children attending those schools. Fidel Castro was the main speaker and his words were carried live on Cuban television. When it was over he and I met in the midst of the crowd and together we walked about meeting many of the young people. 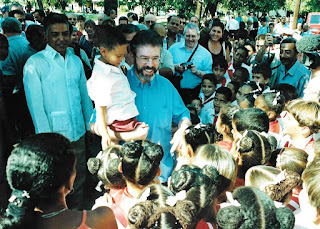 The next day we again met with Fidel in his office. We spent several hours discussing Ireland, the issues of human rights, civil and religious liberties, democratic values, social justice, equality and other matters of concern to people wherever they live. We also spoke about the state of the world, especially in the aftermath of the attack on the twin towers in New York which had taken place four months earlier.

It was also an opportunity for me to thank him for his solidarity with the Irish republican struggle and particularly toward the 1981 hunger strikers. Fidel recalled those events and praised the courage of Bobby Sands and his comrades. He reminded us that in September, 1981, he opened the 68th conference of the Interparliamentary Union in Havana and in his speech praised the courage of the hunger strikers. 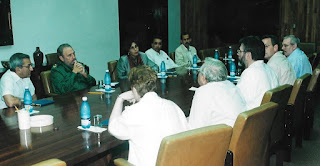 On that occasion he said: “Irish patriots are writing one of the most heroic chapters in human history…They have earned the respect and admiration of the world, and likewise they deserve its support. Ten of them have already died in the most moving gesture of sacrifice, selflessness and courage one could ever imagine…The stubbornness, intransigence, cruelty and insensitivity of the British Government before the international community concerning the problem of the Irish patriots and their hunger strike until death remind us of Torquemada and the atrocities committed by the Inquisition during the apogee of the Middle Ages…Let tyrants tremble before men who are capable of dying for their ideals, after 60 days on hunger strike!”

There is no doubt in my mind that the hunger strikers left a lasting and emotional impression on Fidel.

The revolution in Cuba and the remarkable leadership of Fidel and of Ché Guevara inspired many other peoples around the world in the 1950s and 60s and gave hope that change was possible – that freedom and an end to dictatorship could be achieved.

Fidel was a freedom fighter whose strategic insights helped overthrow one of the most brutal regimes in Central and South America. He was a political prisoner and a skilful negotiator. Fidel was also a peacemaker – a commitment that his brother and successor Raul Castro and the Cuban government has maintained as evidenced in their central role in brokering a peace agreement between the Colombian government and FARC.

Fidel was a friend to those engaged in the struggle for justice across the world. Today they and millions more are remembering and celebrating the life of a great world statesman who by his example and leadership made the world a better place. 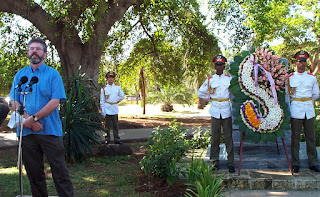 In our conversations he was funny, relaxed, and knowledgeable of world affairs and of events in the Irish peace process. He was as committed to the principles of the Cuban revolution 60 years later as he had been in the 1950s. He was self-effacing in his humour, totally relaxed and very focused.

He asked us many questions about Ireland. From the state of our fishing industry, our farming, as well as about unionism. He wanted to hear the sound of the Irish language so he asked that I recite the Hail Mary in Irish while he recited it in Spanish. He also said that following September 11 attacks in the United States that no progressive struggle would be won by armed actions. They could only be won by the power of ideas. 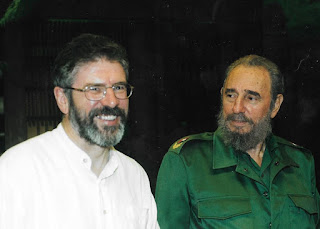 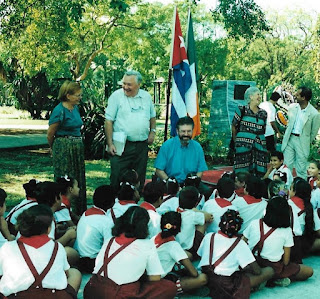