Tory government policies and the drive towards Brexit are whipping up new levels of racism in Britain. As living standards fall the finger of blame is pointed at migrants and Muslims. The aim is to sow social divisions that weaken opposition to the economic attacks.

Islamophobic violence has been on the increase, with visible Muslim women being a prime target. Institutional racism is not tackled, with a spate of deaths in police custody and the huge tragedy at Grenfell Tower. Systematic discrimination continues in employment and housing.

Internationally, US President Trump’s Muslim ban, the proposal to build a border wall with Mexico, other anti-immigrant measures, and encouragement given to white supremacism is strengthening the climate of racism in the US. In Europe there is a growing far right, reflected in the recent electoral advance of the Freedom Party in Austria, Front National in France and AfD in Germany.

The UN Anti-Racism Day march (#MarchAgainstRacism) is an opportunity to build a movement that challenges this racist offensive. This year’s march takes place on Saturday 17 March.

The UN’s International Day for the Elimination of Racial Discrimination was inaugurated in 1966 to commemorate the 1960 Sharpeville massacre when 69 anti-apartheid protestors killed and 178 wounded for taking to the streets against the South African regime’s racist pass laws.

The day is marked by the UN every year and in Britain Stand Up To Racism, working with trade unions and community organisations, organises marches and rallies. As well as marches in London, Cardiff and Glasgow, there will be events in other cities around the world. 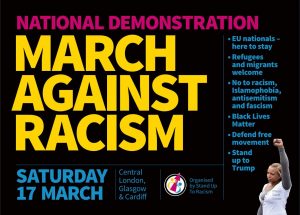