The claim for the latest Tory Budget is that ‘austerity is coming to an end’, and has been dutifully echoed by the Tory press and the BBC.

In reality austerity policies will continue long into the future, extending the longest recorded fall in living standards in this country. The exception is the calendar year 2019, where both Government Consumption and Investment will rise as a one-off, before planned cuts in future years.

This is not an end to austerity, but a single event. On the face of it, it looks like preparation for Brexit and/or a general election either later in 2019 or early 2020 when the effects of the one-off increase in Government outlays is still being felt. This is exactly what George Osborne did in 2014, as part of the Tory Party’s plans for a 2015 general election.

The Table below is taken from the Treasury ‘Redbook’ (pdf) 2018 that accompanies the Budget. It summarises the Office for Budget Responsibility’s (OBR) forecasts for key economic variables in light of its own economic analysis and its assessment of the Government’s Budget.

The Table shows there is an increase on both Government Consumption and Government Investment in 2019. They are both much higher, relatively speaking than in the two preceding years 2017 and 2018. It is also important to note that the growth rate of both these sector of Government outlays fall away again in subsequent years. Both of these were also revised substantially higher solely for 2019, compared to the March 2018 Spending Review, whereas other years have almost all been revised lower compared to March.

This is not a sustained increase in either Government Consumption or Government Investment, which would meet the claim of austerity ‘coming to an end’. Instead, it is simply a one-off event. 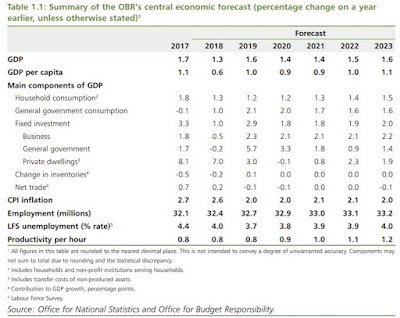 It is not possible to say whether this is in response to Brexit risks, where the economy will surely be worse than otherwise especially if there is no deal with the EU. It may be instead a plan to temporarily stimulate the economy ahead of an intended election. Or both. But it is not end to austerity, which will resume in subsequent years.
Negative outlook

The OBR Table also reveals a deep and abiding pessimism about economic prospects. By 2023 this business cycle will be very mature, as the last recession ended in mid-2009. Yet even without a renewed downturn real GDP growth is officially projected to average no more than 1.5% annually over the entire period. Chancellor Hammond explicitly states that the trend growth rate for the economy has been lowered by the financial crisis. On official forecasts, sluggish growth is the new normal.

The driving force of the economy is Investment, and with it the increasing participation in the division of labour through foreign trade. This is not the OBR’s framework, which remains stuck in a neoliberal/Treasury paradigm that Consumption drives growth. Even so, the OBR’s forecasts are noteworthy for expecting no increase in net trade, and the worst ever growth rate of fixed Investment over such a prolonged period.

Without better growth than is forecast, it is extremely difficult for living standards to rise.

Crucially, the OBR expects corporate profits to slow even further from 3.5% growth recorded in the first half of 2018. It projects that the slowdown will continue with just 2.8% profits’ growth in 2019 and only matching the average real GDP growth rate for the economy in further years.

It also notes that business Investment has risen by just 1.9% in the two years since the EU referendum and fell outright in the first half of this year. If the OBR is even close in its assumptions about profits, it is difficult to see where any rebound in business Investment will come from.

In fact, with weak growth from both business Investment and the Government, the OBR’s entire forecast even of very weak growth rest on a renewed increase in household indebtedness. The Chart below is Chart 3.23 taken from the OBR’s Economic and Fiscal Outlook to accompany the Budget.

It shows household debt rising once more, from 133% of household incomes in 2015 close to 150% of incomes in 2024.
Chart 1. OBR Projections for Household Gross Debt to Incomes 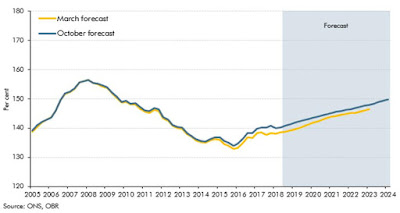 According to the OBR, average earnings growth will not be contributing much at all to increased household consumption, as real average earnings growth measured against CPI inflation will grow by just 4% over 7 years. Measured against the RPI, real average earnings will fall by 2.8% over the same period.
This is at a time when the unemployment rate is expected to remain at historically low levels. Contrary to widespread assertion, wages are not set by ‘supply and demand’. Wages are set within the absolute limits of starvation level of the workers and the entire value of their output. Within those limits there is a struggle between classes for the income share of that output.
The current government, like its predecessors, is vigorously pursuing the interests of employers within that struggle. The net effect to date has been to depress real wages, but not to boost profits sufficiently to promote business Investment, as already noted. Therefore, austerity will continue after 2019 to achieve that outcome. Unless, of course they are stopped.
In a follow-up piece, Labour’s Budget alternative will be examined.
The above article was initially published here by Socialist Economic Bulletin.