The article below by Tom O’Leary provides an analysis of the recent Autumn Statement including the forecasts for growth and living standards that have been revised sharply lower by the Office of Budget Responsibility. A key point is that the OBR is clear: around 60 per cent of the cuts made to those forecasts are a result of the Brexit referendum vote. Brexit will make us poorer.

***
The ever-optimistic Office for Budget Responsibility (OBR) has come under sustained fire from the Brexiteers for its gloomy prognosis and forecasts for the Autumn Statement. This criticism is entirely misplaced. The OBR has underestimated the negative impact of Brexit.

The OBR has loyally served successive Tory or Tory-led administrations having been created by them in 2010 and has routinely forecast much stronger growth than has occurred, along with rising living standards that have failed to materialise. However, what the OBR cannot do is ignore economic reality. Its forecast of weaker growth over the next two years, that is before Brexit is enacted, chimes with almost all private forecasts. The Brexiteers want to shoot the messenger, who brings news of the downturn they have created.

The OBR repeatedly emphasised that it cannot make any substantive forecasts about the Brexit period itself as the government would not provide any information on the post-Brexit economic regime, not even in the widest parameters. Instead, the OBR focused on the immediate negative impact of the Brexit vote and the deterioration of the economic outlook, and even assumed a resumption of slower but steady growth from 2019 onwards. Give the disruption that is currently scheduled for 2019 when the UK is scheduled to leave the EU, this seems implausible.

Worse outlook because of Brexit

The most important OBR forecast changes are shown in Table 1 below (taken from Table 1.1 of the OBR’s November 2016 Economic and Fiscal Outlook). GDP growth falls by a cumulative 1.1%. Household consumption is down by 1.8%. Crucially business investment falls by 12.75%. In terms of living standards, average earnings fall by a cumulative 2.8%. 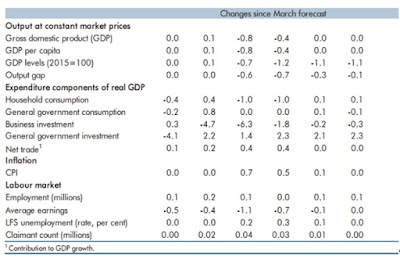 The remainder is the customary downward revision to forecasts as the OBR’s rose-tinted view gives way to reality. But this can hardly provide much comfort to the Brexiteers on the right or left. The OBR has only really taken account of the turmoil of the next two years and its previous track record suggests the forecasts will be markedly lower over time.

It is clear from Table 1 above that the biggest single casualty over the next few years is business investment. This is entirely predictable and predicted. As the level of investment is in part determined by the scope of the market, the UK’s withdrawal from the world’s largest market will inevitably deter investment. Contrary to government propaganda and much easily-led commentary, there will be no attempt to replace this new slump in business investment with increased public sector investment, as shown in Chart 1 below. Contrary to Tory propaganda there is no ‘National Productivity Investment Fund of £23 billion’, it is simply the relabelling of existing government spending on road, rail, housing and so on. 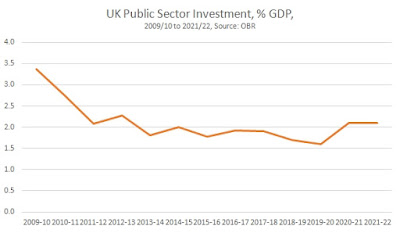 Brexit may have been sold as an opportunity to ‘get our country back’, but no vote can overcome the forces of global capitalism, or abolish the laws of economics. Irrespective of the ideas those who supported Brexit, the effect of the vote is to prolong the longest period of falling real wages in recorded UK history, as shown in Chart 2. Real wages had been falling since the end of 2014, when they were 5.7% below where they were when Labour lost office in 2010. But Brexit postpones the wage recovery primarily through flat wages and higher prices, so that they are not now officially forecast to recover until Q3 2019. This lost decade in wages is prolonged by Brexit. 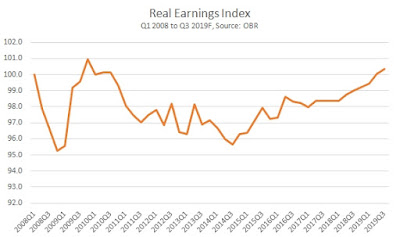 It is this rise in Consumption without any rise in Investment to sustain it which has led to enormous overseas borrowings to cover the current account deficit. Consuming without Investment is also responsible for flat or falling living standards for the overwhelming majority. 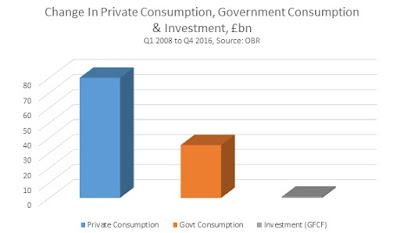 Unsurprisingly, the notion that exports will boom because of Brexit is revealed as pure fantasy. With zero investment the economy can only decline competitively if there is zero investment, once the one-off boost from Sterling’s devaluation fades. This is shown by the OBR in terms of export market share, that is exports divided by imports, in Chart 4 below. In fact, the OBR forecasts showing the relative decline of export performance accelerating post-Brexit compared to the previous trend. 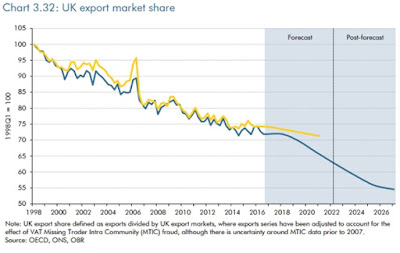 As noted above, the OBR sought but was not given any meaningful advice from the government about its aims in the Brexit negotiations, or what policy outcome it expected. Instead it was given two statements by Theresa May. Below is a key section from the statements they were given.

Theresa May said, “I want it to give British companies the maximum freedom to trade and operate in the Single Market and let European businesses do the same here. But let me be clear. We are not leaving the European Union only to give up control of immigration again.”

The OBR requested guidance on economic policy. What it got was bombast on immigration. This must be assumed to override economic policy, or supersede it.

Yet the OBR is clear: the objective of reducing immigration will itself reduce both growth and living standards for all. There are 70 references to migration in the OBR document. It states that potential growth will be 2.4% because of lower net migration by 2021. To be absolutely clear, this is not simply an effect which reduces GDP, it also reduces living standards for the entire population, measured as per capita GDP. The OBR states, “On a per capita basis, cumulative growth would have been 0.3 percentage points higher because net migration adds proportionately more to the working-age population than to the total population, thereby boosting the employment rate too” (p.45).

It should be the goal of all economic policy to maximise the greatest sustainable increase in the living standards of the population. The Brexit vote and the Brexit government have overturned that strategic aim, replacing it with immigration-reduction. Chancellor Philip Hammond told the Tory party conference that ‘no-one voted to be poorer’. Yet his own government acts as if they did. It is what they will deliver.

The reason the Cabinet Brexiteers are in uproar is that their reactionary fantasies cannot survive contact with the real world. Even the perennial optimists at the OBR must be attacked. But this is in the nature of Brexit, a reactionary project propelled by distortions and outright lies. Because Brexit erects barriers between the UK economy and the world’s biggest market, living standards will be much lower than otherwise. Curbing immigration will compound this effect.

Of course, it is quite possible for political movements and even nations to sustain themselves on reactionary fantasies for a whole period. But they tend not to survive contact with the outside world. The Autumn Statement is probably just a small foretaste of what is to come as the Brexit fantasy meets reality.

The above was originally published here on Socialist Economic Bulletin.